Sept 6 was mostly a travel day. We flew from Buenos Aires to Bariloche (an easy, two-hour flight). Then we took a two-hour bus from Bariloche to El Bolsón. We checked into our apartment, explored around the town, and then did a quick, 4km hike to Mirador Cerro Amigo.

After our hike, we grabbed some pizza at a restaurant in town and then got the famous, homemade ice cream from Jauja. All in all, El Bolsón is a small, mellow backpackers village. Everyone in the town is beyond friendly and talkative!!

On Sept 7 we decided to do our first “long” hike in Patagonia to prep ourselves for our 5 day trek in Torres Del Paine later this month. We took the public bus from El Bolsón to Wharton (about a 45 minute drive) and from Wharton we started our trek along Rio Azul. The trail escalates through a valley carved by Rio Azul and has several “refugios” scattered along the trail. A refugio is essentially a log cabin run by a local that provides food, drink, and shelter. You can rent a small bed or pay to camp on the grounds and use its facilities. 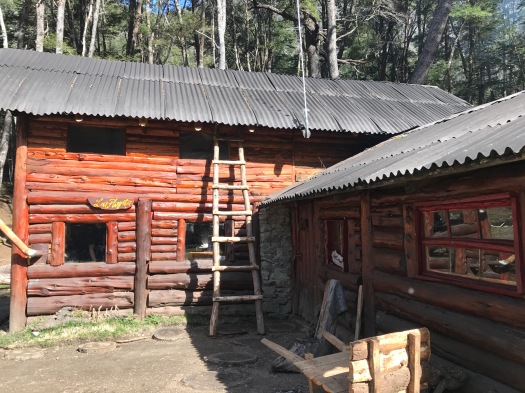 Our hike led us past a few refugios and about 9km later we reached Cajun de Azul, a lookout at a bend of the river. We relaxed for a few minutes, had a snack, and then started our trek back to the bus station to make sure to get back before dark. About 2.5 hours later we reached the station. We were exhausted! We ended up sharing a cab back to El Bolsón with a couple from Buenos Aires. We grabbed chicken and vegetables from the supermarket, cooked dinner, and slept veryyy soundly 😴.
When we woke up on Sept 8, our legs pretty sore. We calculated that we had walked around 23km the day before. We spent the morning relaxing and walking around town to get face masks and warmer gloves. At 1pm, our new friend Mario came to pick us up in a 4×4 to drive us up a mountain. We thought it would be a 30 minute drive up, we see the “Bosque Tallado,” and then we would drive back down. Boy were we wrong..

We drove about 30 minutes up the mountain as we had expected. Then we, Mario, his sister, and this woman Karina (who owns the apartments we are staying at) got out of the car and started a 1 km ascent to “Bosque Tallado.” As we hiked higher and higher, the temperature started decreasing and the snow started getting very icy. Luckily we all had walking sticks that we found near where we parked the 4×4. In about 45 minutes we made it to “Bosque Tallado,” which translates to “The Carved Forest.” All around us were tons of sculptures carved out of wood from the trees on the mountain. Each sculpture was very impressive!

After the forest we ascended about 200m more to meet the rest of our crew at Refugio Piltriquitron, which some people call the “refuge in the clouds.” It was beyond breathtaking and completely worth the trek!! 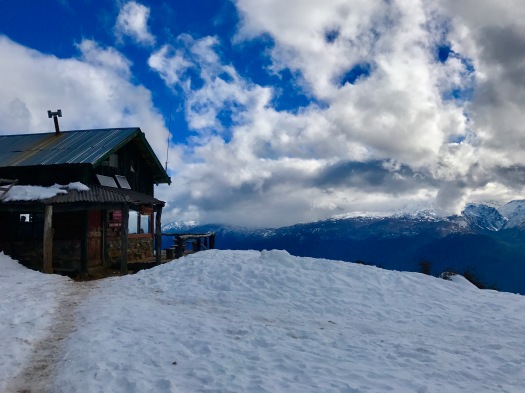 We hung at the Refugio for a while. We had snacks, homemade beer, and talked with the owners of the refugio and the locals that had slept there the night before. As we were getting ready to leave, we talked about how we were going to get down since it was going to be slippery. Truth be told, we ended up sliding down on our butts for some of it! It took us less than 45 minutes to descend and we hopped back in the 4×4 to head back to the apartment. The day was definitely more rigorous than we expected, but it was completely worth it and we are so happy we went!! For dinner, we decided to treat ourselves and go out to a restaurant that many people from the town rave about. The restaurant is called La Gorda and we ordered “bife de chorizo” (which is very popular in Argentina) which was served to us as a sandwich with steak as the buns and then bacon and cheese inside!! Definitely not our healthiest meal, but boy was it delicious!!!

Now we are off to Bariloche for a day before heading to El Calafate! 😁

One Reply to “El Bolsón, Argentina”