Since we had so much fun traveling to Barcelona for a long weekend, we decided to do it again and go to Stockholm for Memorial Day Weekend!

On Thursday evening we took a direct flight from Newark to Stockholm. We landed at around 7:30am, took an Uber to our hotel in Östermalm to drop off our bags, and started walking around and exploring the city. Stockholm is very walkable, measuring less than 5 miles in diameter, and is filled with shared bikes and electric scooters.

First we stopped at Nybrogatan 38 to have delicious coffee, an acai bowl, and avocado toast.

We then walked along the water and crossed the bridge into Blockhusudden to reach our first site, the Vasa Museum.

Vasa is a grand naval ship that was built in the 1600s. During its maiden voyage, it sank less than 1,000 meters from the shore into the harbor due to its two layers of heavy cannons. In the 1970s, archaeologists found the ship 30 meters below the ocean and began working to lift the ship. After years of work, the ship was brought to shore and is now the centerpiece of Stockholm’s most popular museum. 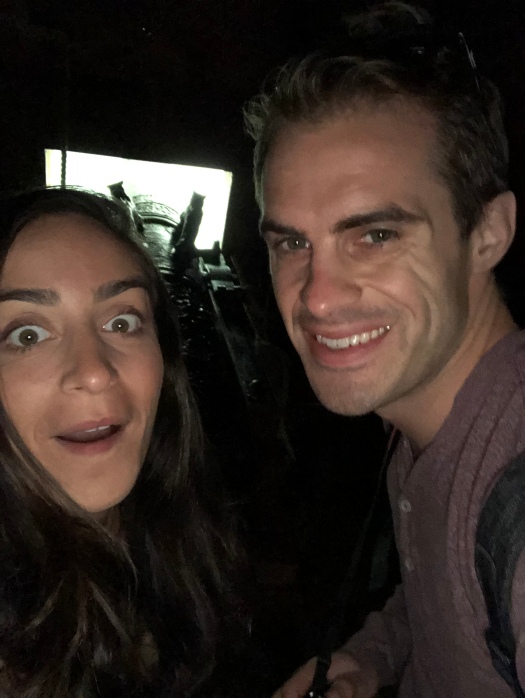 After the museum, we continued to power through the jet lag. We stopped into a small cafe along the river for some coffee and the first of many cinnamon rolls.

We then walked back to the hotel since it was time for check in and we needed a power nap.

After our nap, we had some time to spare before dinner. We walked through Park Humlegården to get to a hotel named Scandic Anglais, where we enjoyed some wine on the roof while overlooking the park. It was a little chilly, but we sat under a heat lamp and wrapped ourselves in a blanket.

From our drinks, we then walked about 30 minutes through the city to get to dinner (since it was still completely light outside!). We had dinner at Agrikultur and it was hands down the best meal of the trip. 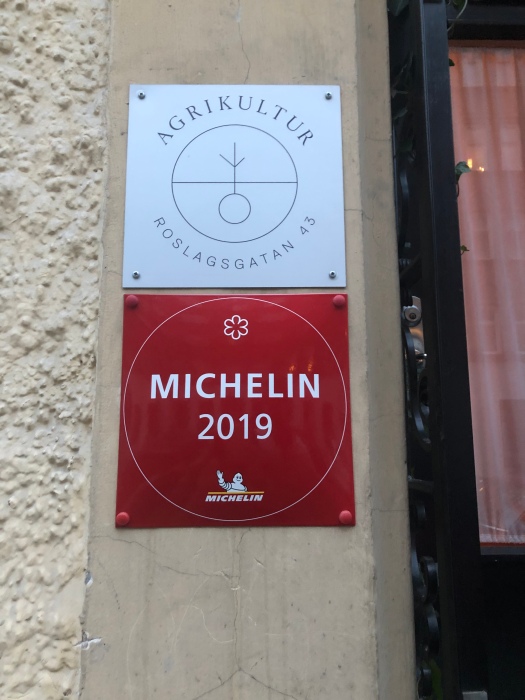 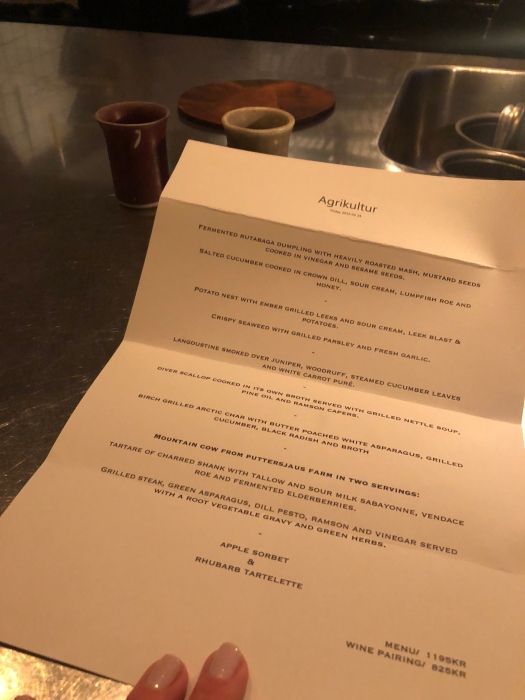 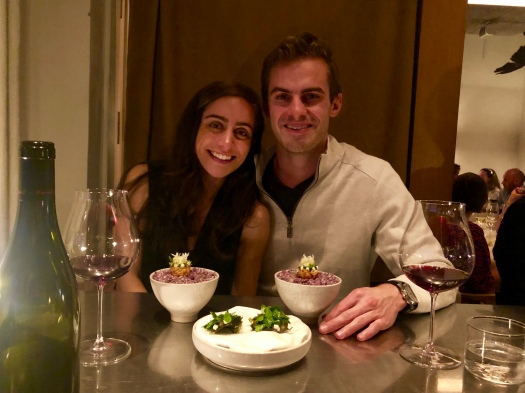 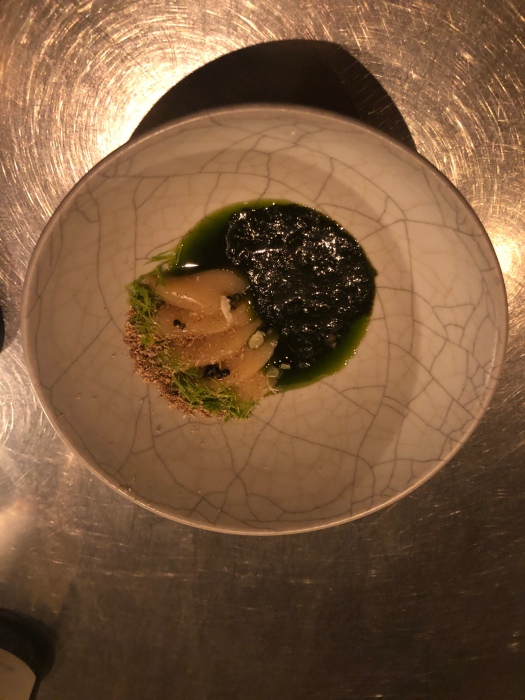 This Swedish farm to table restaurant reminded us of Blue Hill in New York. They served us an amazing 8-course menu that consisted primarily of local vegetables, fresh fish, and parts of an entire cow that the restaurant purchased a few weeks prior. Our waiter chatted with us about traveling and his favorite restaurants in New York and Stockholm.

May 25 will, for now on, be an extremely special date since it was the day Cody proposed!! We are not going to go into details about our proposal on our blog. All we will share is that it happened in Park Humlegården and it was perfect 🥰.

After the proposal (and a not so brief photoshoot) we had brunch at Kajplats 18 (“Pier 18”). The small greenhouse-like restaurant was on the water. We sat by the window overlooking the harbor and shared champagne and a few small dishes. 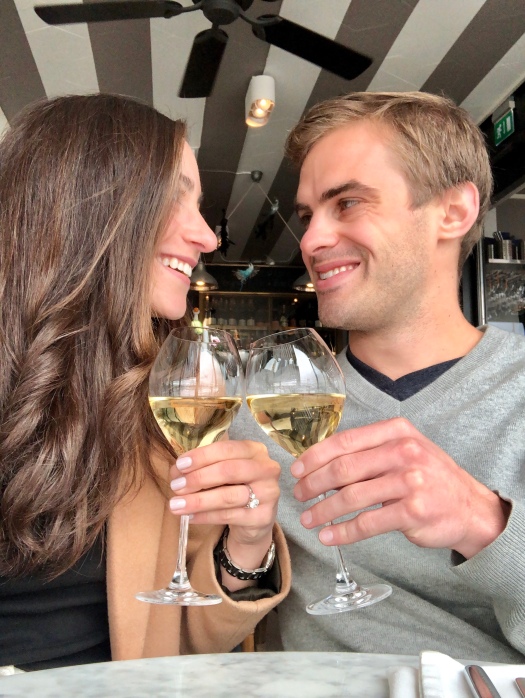 After lunch we hopped on a ship for a 2-hour cruise of the Archipelago. We found two seats at the back of the boat and enjoyed the views and the comical banter from the tour guide. 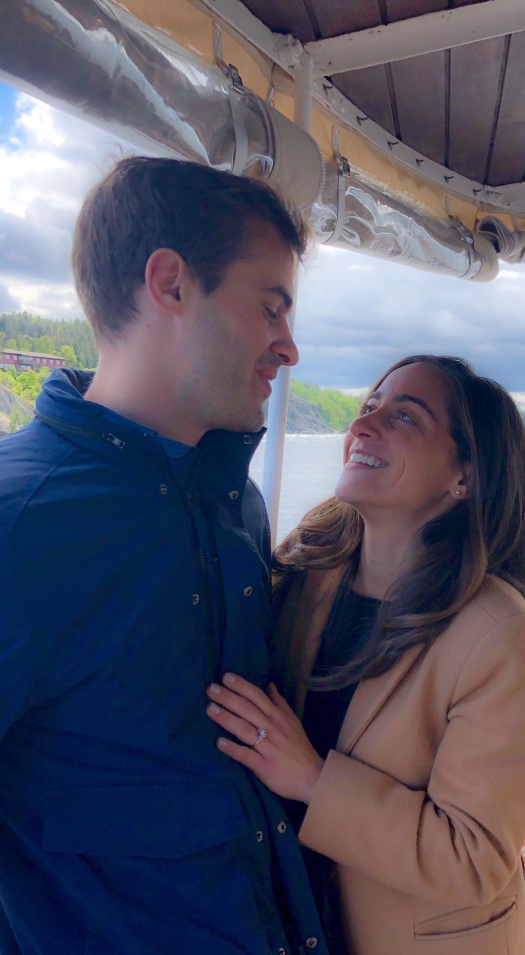 After the cruise we walked through Norrmalm to a popular restaurant called Lilia Ego that our waiter from Agrikulture recommended. While we waited for our spot at the chef’s counter, we had a drink and delicious bread outside. Just like our dinner the night before, we were beyond amazed with how much we liked the Swedish dishes served to us! 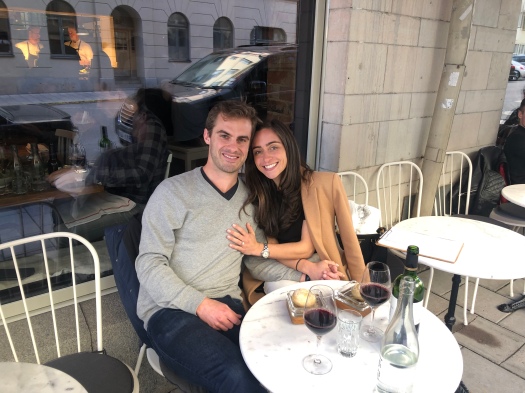 When we arrived back at our hotel after dinner, we realized it had been about 12 hours of us being engaged and not telling anyone! Soo….we decided it was time to start calling family and close friends. There were many happy tears and lots of excitement. Afterwards, we weren’t ready for bed, so we decided to go across the street for drinks and a second dessert because why not?!

After sleeping in, we decided to spend some time in the hotel gym. After a quick workout, we had breakfast at the hotel and then headed to Gamla Stan. Gamla Stan is Swedish for “Old Town” and it is one of the largest and best preserved medieval city centers in Europe. The city is on an island and has two very conveniently named streets that circle the city called West Long Street and East Long Street. 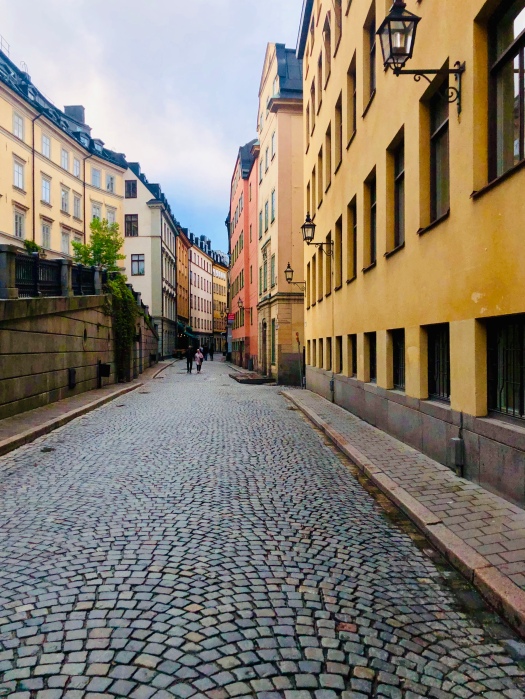 During the walking tour it start pouring, so we decided to leave half way through and spend the rest of the day cafe/restaurant hopping! First we went to Kafe Krans and shared a sandwich, tea, and another cinnamon bun (surprise)! Then we continued to walk through the windy cobblestone streets and popped into a traditional Swedish restaurant called Restaurang Mårten Trotzig, where we tried Swedish meatballs made from reindeer and lingonberries! The meatballs were better than those at IKEA, but we decided they are not something we needed to have again 😝.

After we finished eating, the weather cleared up so we decided to walk to the photography museum called Fotografiska. This museum was AWESOME! Not only were there photography exhibits of Emma Watson and Cindy Crawford, but there also happened to be an exhibit called “Vanishing Traces” which featured many of pictures from the salt flats in Bolivia (aka one of our most favorite places!!). After walking through the museum, we spent some time on the top floor cafe to relax, call some more friends to tell them the big news, and take in the beautiful views. 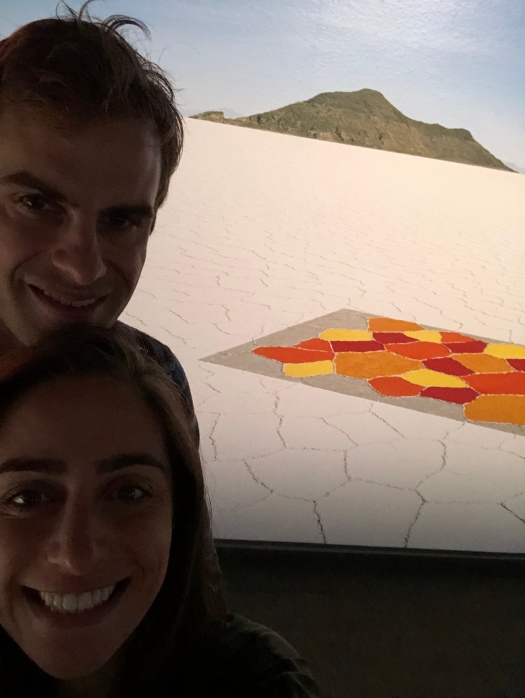 When we were at Agrikultur on our first night, we talked with the head chef who suggested we try their sister restaurant called Bar Agrikultur before heading back to NYC. Since the restaurant is close to the museum, we decided to go there for dinner. Once again, we were blown away by how delicious all of the dishes we ordered were.

After having many pastries and food throughout the day, we decided that it was a good idea to walk back to the hotel.

We kicked off our last day in Stockholm with some more coffee and cinnamon buns, this time from a different spot called Robert’s Coffee. We then walked about 30 minutes to Oaxen Slip, the “back pocket” restaurant of Oaxen Krog, which is a 2 Michelin Star restaurant in Stockholm. It was very yummy!

After lunch we decided to ride electric scooters to get back into town and make our way to Södermalm, the hipster neighborhood of the city. We popped into a bunch of stores along the way attempting to find an old map of Stockholm, but unfortunately we were unsuccessful.

Before we knew it it was late afternoon and time to go to the famous cocktail spot called Pharmarium! Cody ordered a whiskey cocktail and Mel ordered a golden vodka cocktail.

For our last supper, we went to Matbaren in The Grand Hotel. 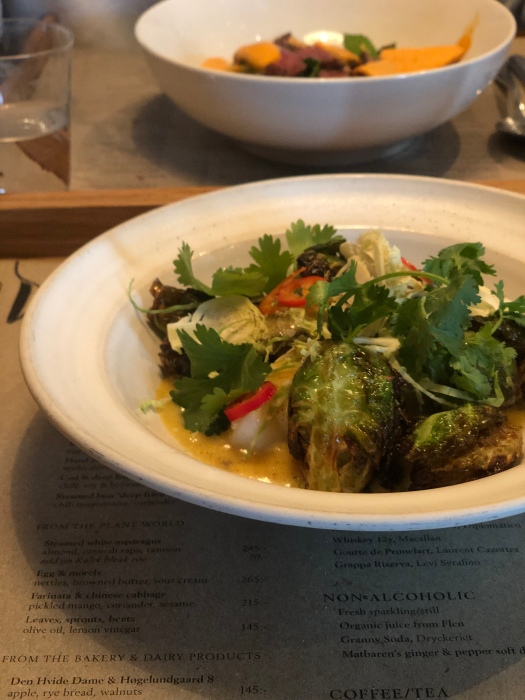 Stockholm will always be a really special place for us. Not only did we get engaged there, but also it was the 20th country we traveled together to!! 🇸🇪💕